A Liverpool ophthalmologist has been awarded the Member of the Order of the British Empire (MBE) in the 2022 New Year Honours List.

Professor Simon Harding, Consultant Ophthalmologist at Liverpool University Hospitals NHS Foundation Trust, received the honour in recognition of his life’s work dedicated to services for the prevention of blindness.

Professor Harding has worked at the Trust’s leading St Paul’s Eye Unit since 1981, and over the last 30 years has been instrumental in a number of significant research and clinical breakthroughs for patients who require specialist eye care.

Professor Harding said: “I’m absolutely thrilled to receive an MBE. It’s been an honour to work in St Paul’s and support patients by introducing pioneering treatments based on cutting-edge research. This not only benefits our patients here in Liverpool but also around the world. For me it hasn’t really been a job but a passion, and to be recognised in this way is truly remarkable. 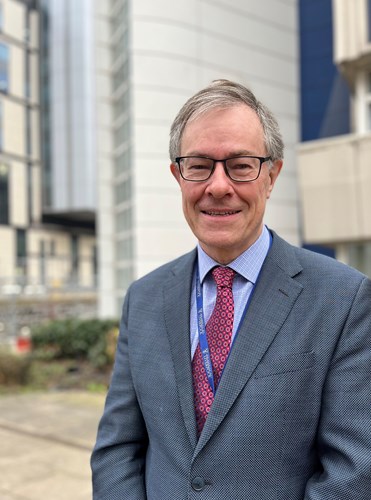 “I wouldn’t have been able to do my work without the tremendous support of an incredible team of friends and colleagues. And of course, the research I’ve led couldn’t have happened without the thousands of people who have volunteered to join our research studies.”

Sir David Dalton, Interim Chief Executive of Liverpool University Hospitals, said, “Congratulations to Professor Harding on receiving his MBE in the 2022 New Year Honour List. His brilliant work supporting our ophthalmology patients here at the Trust, as well as nationally and internationally, is truly deserving of this honour.”

The prestigious honour recognises Professor Harding’s commitment to supporting his colleagues and patients, through continually developing ophthalmology services at the Trust to provide outstanding care.

One of his goals was to create a more effective pathway to bring new medical treatments from the laboratory to the patient’s bedside. This passion for improving research for the benefit of his patients saw him establish St Paul’s Eye Unit’s Clinical Eye Research Centre (CERC) in 2014.

Through his capacity at LUHFT and as Chair Professor in Clinical Ophthalmology at the University of Liverpool, Professor Harding created the CERC to link the Trust and University teams together to develop stronger clinical engagement and expertise, and conduct world leading research. Many of the studies undertaken there have gone on to directly influence the way the Trust, and other hospitals, treat patients.

Since opening, the CERC has hosted over 70 pioneering trials, and is now involved in every major ophthalmic trial being undertaken in Europe.

Among his many achievements, Professor Harding was instrumental in establishing the first diabetic eye screening programme in the UK and setting up national programmes, saving the sight of thousands of diabetic patients. The service is now replicated in over 20 countries around the world. Professor Harding is currently working with the Chinese Medical Association and the World Health Organisation Regional Office for Europe to help establish diabetic eye screening for the 140 million people with diabetes in China, and the 60 million in Europe.

In Malawi, since the 1990s Professor Harding has led the ground-breaking development of pioneering techniques to accurately diagnose cerebral malaria. The disease kills around 500,000 children each year in Sub-Saharan Africa through causing severe brain swelling and the rapid onset of a coma. Through identifying retinal abnormalities, they can now help determine with high levels of accuracy if a patient has cerebral malaria, opening up the chance for life saving treatment.

Professor Harding also introduced the first effective treatment for age-related macular degeneration (AMD) in the UK, which is now widely available throughout the world. AMD is the greatest cause of blindness in the western world, and affects around 600,000 people in the UK alone.

Until recently, Professor Harding had been the chairman of a registered charity, The Foundation for the Prevention of Blindness, which he founded in 1992. The charity has gifted over £5.5 million for 91 research projects, to develop and support ophthalmology and vision science.