“I’d lost all hope and thought I’d never walk again, but the rehabilitation team were amazing and encouraged me so much, and I was able to walk out of hospital after seven months,” said Joanne Nelson, who is now a finalist in the Echo Awards 2020.

Joanne, who works for Crosby Housing Association, has been nominated for the Courage Award by her manager, following severe bronchitis that began almost a year ago and caused Joanne’s health to deteriorate.

In March she spent three weeks in Intensive Treatment Unit (ITU) at Aintree with pneumonia. “I became so unwell I couldn’t walk and they didn’t really know what caused it, but then due to COVID I was sent home with a hospital bed and my husband was caring for me. I was then re-admitted to ITU in July and I remember thinking ‘what’s the point, I’m just wasting a bed’, I’d started to lose hope that I’d walk again.” 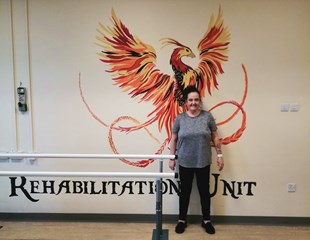 Slowly, thanks to the care from the ITU team, Joanne’s health began to improve then she was transferred to Broadgreen Hospital in September to start an intensive rehabilitation programme, which includes dieticians, occupational therapy and psychologists. “They are such an amazing team and gave me the courage to battle through. I’ll never be able to thank them enough, they were so supportive, encouraging me to work hard to build my mobility up again. I’m not sure I’ll ever be back to ‘normal’, I still get tired quickly, but I’m able to go out and walk on the beach, which is something I’m so thankful for,” said Joanne.