Colleagues from the Major Trauma Centre at Aintree have raised £1,232 for a charity supporting our patients who have experienced significant injury, by running, cycling, and walking throughout July.

Day One is a charity supporting survivors of major traumatic injuries. It originated at Leeds Teaching Hospital, and Liverpool University Hospitals is the first external major trauma centre to be supported by the charity since it launched independently in May 2021. 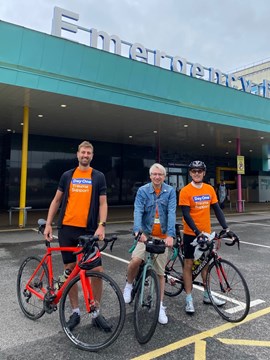 Simon said: “It was a great experience to cycle 100 miles. It was definitely challenging at points, but a real achievement! I am very proud of my colleagues in the Major Trauma Centre who took part in this event – whether it was cycling, running or walking – everyone’s efforts have contributed to making a difference to the patients we care for.” 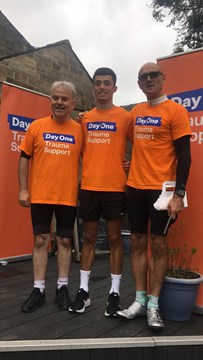 Steve Warburton, Chief Executive at LUHFT, saw off the cyclists before their cross-county ride: “It’s a fantastic accomplishment and everyone who took part should feel incredibly proud. The funds raised will go toward further supporting our trauma patients, improving their long-term recovery and quality of life once they leave our care.”

Several other fundraising events also took place for the charity. A team of 13 runners from #TeamLUHFT won a virtual relay race, covering the 94-mile distance between the two cities in a time of 14 hours and 3 minutes. On the hottest day in July, Major Trauma colleagues John Fletcher, Linzi-Joy Harrison, Emma Lathom and Claire Norris also walked a round trip from Aintree to Southport Hospital, raising £750.