When Simon Scott and Sharon Blanckley first crossed paths as orthopaedic surgeons-in-training 20 years ago, neither of them thought they would one day be working together, married and starring in a primetime television series. 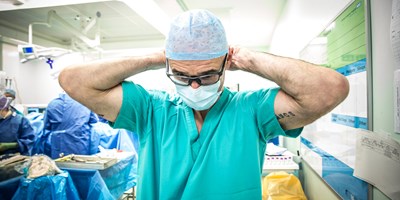 But last night (Thursday 13th February) the nation saw the pair performing emergency lifesaving surgery on a 91 year old gentleman named Ron, who was the first person to be treated as part of Liverpool’s reconfigured trauma and orthopaedic services after fracturing his hip and dislodging a hip implant during a fall.

The changes mean that all orthopaedic trauma surgery will be carried out by a specialist team at Aintree University Hospital, which is home to the Cheshire and Merseyside Major Trauma Centre.

Sharon, who grew up in Stockport and studied medicine at Newcastle University, knew from the age of five that she wanted to be a surgeon but it was while she was on rotation in Merseyside in 2000 that she knew she wanted to specialise in orthopaedics.

She said: “Being on rotation is when you get experience of the different areas you may choose to specialise in when you qualify. My first operation was removing a metal plate that the patient had from a previous ankle fracture. It might sound odd but as soon as I had that screwdriver in my hand I knew orthopaedics was what I wanted to do.”

Meanwhile Simon, who studied at the University of Liverpool, originally wanted to be an accountant in his hometown of Bedford.

He said: “It was my dad who suggested I go into medicine. He didn’t have a medical background but my mum was a theatre nurse. He told me I was caring, compassionate and good with my hands, so that’s what I did.”

Simon was appointed consultant orthopaedic surgeon at Aintree in 2004, following a specialist fellowship in Australia, while Sharon embarked on her consultant career at Leighton Hospital. Her keen interest in trauma patients developed during a specialist trauma fellowship at Queen’s Medical Centre in Nottingham.

In 2010 Sharon was appointed to lead on the development of the region’s Major Trauma Centre at Aintree Hospital.

Simon said: “It’s pretty rare to find a couple who work in the same department, with the same interests. Our rotas mean we don’t always cross paths during the working day, but about once a month there will be a complex surgery where we end up in the operating theatre together and we frequently discuss the management of our most complex patients.

“Sometimes you just need an extra pair of hands but we also have different expertise and areas of interest, so we can contribute in different ways. With Ron, for example, I’m really familiar with the kind of hip implant he required, while Sharon has a specialist interest in fracture fixation, so it worked well to have us both in the room. Our skills and approaches combined to enhance the results of Ron’s surgery.” 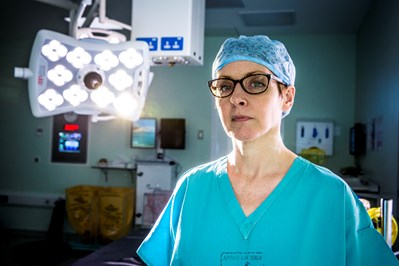 Sharon added: “Back in the day surgeons tended to work very much in isolation, but where it’s appropriate it can be really beneficial to have two consultants working together. We have pushed this aspect of care at Aintree. The patient gets double the expertise and surgeons can bounce ideas off each other, which ultimately leads to a better outcome for the patient.”

The couple – who married in 2014 and now live in Cheshire with their four children and two dogs – say they hope the series will help the public appreciate the complexities of specialist surgery and also to understand the decision making behind the reconfiguration of some NHS services in Liverpool.

Sharon said: “Making sure our patients get the best experience possible has been central in the decisions we have made around merging our hospitals and moving some services. I hope that by seeing how someone like Ron has benefitted from this helps the wider public understand our decision making.”

Simon said: “I’m really proud of the team we have and the work we do here, so I was only too happy to take part in the programme. There is a really moving scene where two of our brilliant physiotherapists help Ron walk again after his operation. That shows how it is a real team effort to put our patients back together again after suffering what can be incredibly traumatic and potentially life threatening injuries. It just puts everything into perspective.”

Hospital continues every Thursday at 9pm on BBC2.