A dad-of-one from Liverpool University Hospitals has experienced a Father’s Day surprise that he will never forget thanks to his five-year-old daughter, Liverpool Football Club and NIVEA MEN.

Lee McNeil, who has worked in the endoscopy administration team at the Royal Liverpool University Hospital since 2015, enjoyed a surprise one-on-one chat with Liverpool Football Club’s superstar midfielder, Thiago Alcantara. Thiago had learnt all about 37-year-old Lee from his young daughter, Thea. 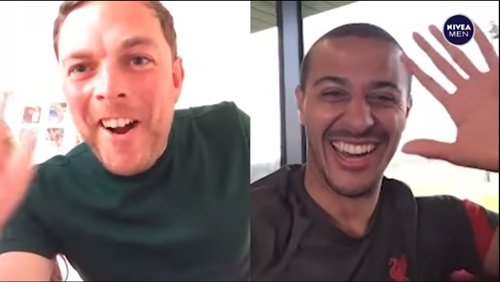 To celebrate her dad, who has been diagnosed with rectal cancer, Thea wrote to the Merseyside club to ask if he could have a surprise:

“I don’t really like football, but my dad loves it. He’s the best daddy in the world. Even when he’s tired, he tucks me into bed and stays with me until I’m fast asleep. He deserves a surprise for everything he does for me.”

LFC teamed up with NIVEA MEN to arrange the surprise video call between Thiago and Lee, who had no idea what was happening until the moment he was shouted upstairs by his fiancée, Amanda. 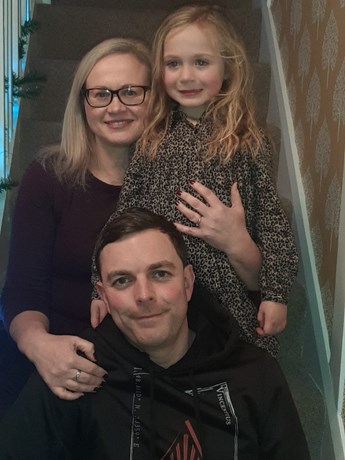 “I didn’t have a clue. Amanda and Thea were upstairs for quite a long time – they said they were tidying but I thought it was a bit suspicious,” said Lee, who first met Amanda at the Royal, whilst they were both working in the pharmacy team.

“My sister then phoned me and was talking to me for ages, which was weird! I then got this shout to come upstairs. That’s when I first saw Thiago, I was completely taken aback! I’ve been a season ticket holder since I was about eight. To see one of your heroes like that – it’s just amazing.”

Thiago explained to the huge LFC fan how Thea had arranged the whole thing, and that he wanted to give Lee a boost of energy after his difficult past few months. The pair talked through Lee’s cancer diagnosis, which he has found out about only two days before Christmas last year.

Lee is currently still undergoing treatment, and has already been through four cycles of chemotherapy. However he’s feeling really positive, as he told Thiago:

“It’s been a tough year so far, but we’re staying positive. There’s no point being down or feeling sorry for yourself – there’s people worse off than me. We will get through it and get back to the things we love like family holidays.”

Thiago replied: “I came on here to try and give you a boost, but you’re the one who is giving me the boost!”

As a further surprise, NIVEA MEN arranged to cover the cost of Lee’s season ticket for the upcoming season, and there are plans in place for him to visit the training centre when things go back to normal – so he can meet all the players and manager Jürgen Klopp in person.

Lee said: “I’m like a big kid, I can’t wait! They are also generously paying for the three of us to go on a family holiday when it’s safe to do so, as we had to postpone our trip due to my illness. I honestly can’t believe it.”

Since the video of surprise has gone online, Lee has received thousands of well wishes from complete strangers.

“The reaction has been mad, my phone hasn’t stopped. I put the link on the work Whatsapp group and they couldn’t believe it. Some of the lovely comments have been mind-blowing. It’s been such an incredible experience.”