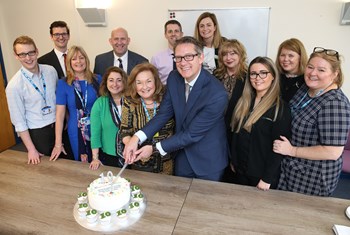 The Trust celebrated the 10-year anniversary of its partnership with LloydsPharmacy at a special event held earlier this month.

In 2009, LloydsPharmacy opened an outpatient dispensary at the Royal Liverpool University Hospital. At the time, this partnership was the first of its kind, but LloydsPharmacy has since expanded it to 45 other acute hospitals across England.

“Outpatients at the Royal Liverpool University Hospital have benefitted over the last decade with quicker access to medicines as a result of our work with LloydsPharmacy and it was great to celebrate this milestone with the team. We have recently opened a second LloydsPharmacy at Aintree University Hospital so outpatients there can also enjoy quicker access to medicines, which has the added benefit of freeing up our hospital pharmacy team to focus on inpatients. The service has also freed up valuable pharmacist and technician time in the hospital dispensaries which has improved the quality of inpatient care.”

The anniversary was marked with a special celebratory event attended by patients, employees and senior representatives from the Trust and McKesson UK (parent company of LloydsPharmacy).

“We are incredibly proud of our partnership with Liverpool University Hospitals Trust and the impact it has had on patients.”