A young mum who spent three months in Aintree University Hospital has returned to thank the staff who saved her life after a serious road traffic incident in 2021.

Ruby Flanagan, 25, returned to the Major Trauma Centre (MTC) at Aintree, to meet staff as the centre celebrates its 10th anniversary.

In August 2021, Ruby, a nurse at Arrowe Park Hospital in the Wirral, was walking with her son Leon, who was six-months old at the time, when she was crushed between two cars in Wallasey. Due to the severity of her injuries, Ruby was brought to the MTC for emergency surgery to amputate her right leg and have her pelvis and left leg reconstructed.

Ruby had nine operations during her 13 week stay in hospital. She said: “It was horrible to be on the other side – I am so used to being the one providing care, so to be a patient was so difficult. From the moment I was brought in, all of the staff at the Major Trauma Centre were amazing, going above and beyond for me. I really felt like I was part of a family, part of the team.”

The Major Trauma Centre is the regional centre for Cheshire, Merseyside and the Isle of Man. A partnership between Liverpool University Hospitals NHS Foundation Trust (which runs Aintree University Hospital) and The Walton Centre NHS Foundation Trust, since opening in June 2012, more than 11,160 patients admitted via the Aintree Emergency Department received a ‘Trauma Team Activation’, with many more patients also receiving expert care from the highly experienced and specialist staff at both Trusts. 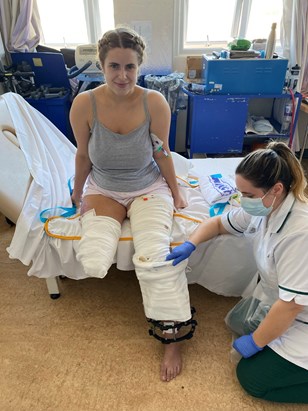 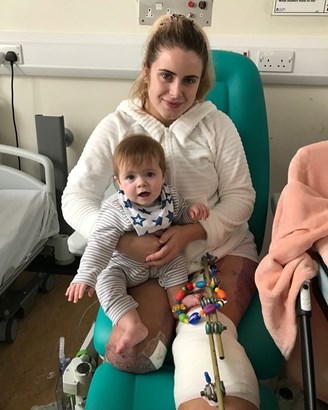 Ben Fischer, Consultant Orthopaedic Surgeon said: “When you have a life-changing injury that requires multiple operations, every second counts. At the Major Trauma Centre we are set up so that patients like Ruby can come straight here and receive the urgent care they need. Having an expert multi-disciplinary team makes a real difference to our patients’ care. It’s this teamwork that gives patients their best chance of recovery and we’re incredibly proud of the exceptional lifesaving care we have and will continue to provide.”

For Ruby, the expert care at the MTC was pivotal to her recovery, both physically and mentally. She said: “Being there for three months I naturally grew so close to everyone, and I think that really helped me on my road to recovery as they pushed me to do more, to get better. It felt like a safety net, knowing I could be looked after by these amazing people.”

Dr Róisín Cunningham, Consultant Clinical Psychologist at Liverpool University Hospitals, says psychological support is crucial for recovery as there are a number of traumatic circumstances in which patients may need support.

She said: “From a psychological point of view there can be huge adjustments that need to be made which require tremendous strength and resilience. We’re helping people to adjust to loss and change and we want patients to leave therapy believing in themselves. I’m continually amazed by patients like Ruby and what they can achieve and cope with. It’s about reaching a positive balance of motivation to move forward, but also acknowledging loss and allowing yourself to process what you may have experienced, especially for someone like Ruby, who had a particularly traumatic experience." 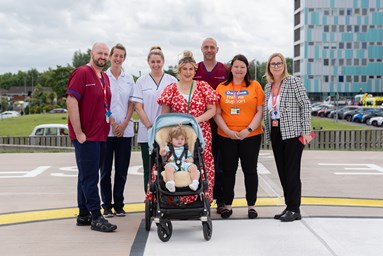 Across the decade, the MTC has grown considerably to meet the demands of the service it provides. Originally consisting of 12 beds, it is now a 21 bedded ward supported by a full multi-disciplinary team, including Major Trauma nurse practitioners, physiotherapists, surgeons, clinical psychologists, critical care, a range of theatre staff and many more.

In 2017, the hospital’s £1m helipad, funded by the HELP Appeal, was also opened – meaning that trauma patients flown in via air ambulance could land directly outside the MTC, which means patients can be transferred into the hospital in a matter of minutes. Air ambulances previously had to land on a nearby playing field and patients were then transferred by ambulance, which could take up to half an hour.

Looking to the future, urgent and emergency care at Aintree will only continue to improve. The Trust is currently investing in estate developments at the hospital, with plans to reconfigure its emergency department to enable them to ensure that the region’s sickest emergency patients – just like Ruby - get the quickest access to the most effective care for them. These proposed plans work toward Liverpool University Hospitals’ ambition of addressing the significant health inequalities that face its communities.

During her hospital stay, Ruby and her family were also supported by Day One Trauma Support, a national charity which provides patients at the MTC with practical, emotional, and financial support. The Trust partnered with the charity in 2021, and Ruby was one of the first people to benefit from their support and advice.

Ruby has been continuing her rehabilitation at STEPS, a dedicated residential facility in Sheffield, and hopes by the end of July she will be able to have the stabilising cage around her left leg and the bar in her pelvis removed. She is looking forward to getting her life back on track and making new memories with her son:

“There’s too many people to thank, but everyone from the public on the day of the accident, North West Air Ambulance and North West Ambulance Service, to staff at the MTC and Day One Trauma Support, they have helped me so much. 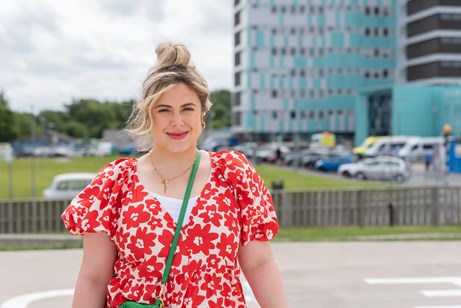 “I’ve blocked a lot of the accident out. It was so traumatic – I can’t describe how it felt – but by the end of my three months in hospital I felt ready to leave and continue my rehabilitation thanks to all the staff at Aintree. Each week there’s a new thing I want to work on, whether it’s walking up and down the stairs with the baby or pushing myself to do something new. I feel like I am coming out the other side now.”