Mr Nikhil Misra, Consultant Trauma Surgeon, went to Westminster recently to promote the work of the KnifeSavers charity, which has distributed more than 1,500 bleeding control kits around the North West and provided education and training sessions for numerous organisations in the region.

KnifeSavers was founded in 2019 by Mr Misra in response to the increasing number of people being treated for knife injuries in the Major Trauma Centre at Aintree University Hospital.

The charity works to distribute bleeding control kits to schools, nightlife and sporting venues so that, in the event of a stabbing, there is equipment on hand to minimise blood loss whilst emergency services are alerted. Mr Misra and the team from KnifeSavers headed to London to meet with the All-Party Parliamentary Group on Knife Crime and Violence Reduction. 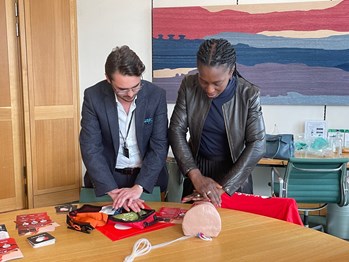 Kristian Tattam, Junior Anaesthetist at LUHFT, demonstrated how to use the bleeding control kits to MPs during the visit so they could understand how the packs – which include gauze and coagulant to form a clot - can be vital in saving lives from a single stab wound.

Mr Misra said: “It was a privilege to represent KnifeSavers, LUFHT and the City of Liverpool in Westminster and showcase the ongoing work and talk about the vision of the KnifeSavers campaign.

“We discussed the need for a national strategy for bleeding control education and greater access to bleeding control kits, using the strategy and results of the KnifeSavers campaign as a model that could potentially be rolled out nationally.”

Part of the team speaking to MPs included KnifeSavers ambassador Laura Hughes, who began raising awareness and funds to support knife crime initiatives after her brother Colin McGinty was killed in 2001 when he was just 21 years old.

Laura said: "Our vision as a youth anti-knife crime campaign is to be able to have the kits everywhere, wherever there’s a public space where kids hang around – in parks, community centres, shopping centres, youth clubs and fast food outlets.

“We’ve already been asked for them by schools and we’re working with the National Trust because we want to have them put in the pinewoods and on the beach.”

The response from local MPs Bill Esterson and Ian Byrne has been positive and it is hoped the visit to Westminster will encourage more MPs to support the KnifeSavers campaign.